There is a broad spectrum of interdisciplinary problems where we are happy to provide our expertise in theoretical physics, simulations and data analysis. Below are some of our most recent active research areas.

Biofilms and physics of bacterial colonies

Biofilms are dense multicellular communities of bacteria that form on surfaces. Biofilms are widespread in nature and implicated in many acute medical and industrial problems. Previously we discovered that mature biofilms of B. subtilis bacteria grown on agar surfaces possess a network of interconnected channels which facilitate the transport of liquid within the biofilm. We now turned to the early stages of biofilm development and want to understand how biofilms form. Together with our collaborators, group of Nicolas Biais (CUNY, USA), we consider the self-assembly of N.gonorrhoeae bacteria microcolonies. These bacteria cause one of the most common sexually transmitted diseases gonorrhoea where the microcolonies represent the infectious unit of the disease. In a series of works, we demonstrated that cells use long retractile filaments called pili to attach and move on surfaces as well as to attach to other cells and self-assemble into spherical colonies containing thousands of cells. Here we applied a variety of statistical physics approaches from modeling to the analytical framework of kinetic and hydrodynamic descriptions. Recently we were able to create an in silico model of the bacterial colony with explicit pili dynamics and interaction forces that recapitulates our experimental observations on various space and time scales. We could show that the pili forces were responsible for the emergence of heterogeneous cell motility within large micro-colonies of essentially identical cells.  The presented figure illustrates the cross-section of the micro-colony where the mutant cells (red) that are not able to retract pili get segregated to the outside of the wild-type cells (yellow).

Our next step is to relate the force distribution within the colony (which can now be obtained in our model) to the gene expression pattern (which can be measured experimentally) and thus test for the hypothesis of mechanosensing in bacterial communities. 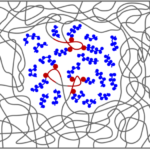 In plants, animals, and humans at the very first early stages of embryo development the genome is transcriptionally inactive. Only after several cell division cycles genome gets activated and takes over the control over the development. Together with our experimental collaborators (group of Nadine Vastenhouw, MPI-CBG Dresden) we could show that the silencing of the transcription is achieved via histone proteins competing with transcription activation factors. The chromatin bound to histones and forming nucleosomes is inaccessible for transcription factors. As DNA keeps replicating, the histones get depleted and eventually loose the competition, allowing for the onset of transcription. We now exploit the onset of genome activation to investigate the effect of transcriptional activity on the chromatin structure. This project involves a series of innovative biological techniques and proposes a novel concept of phase separation in the nucleus which is driven by the RNA polymerase activity (see figure for illustration of the model). Actively transcribing chromatin (red) creates an interface of the inactive chromatin (black) with the RNA and RNA-binding proteins (blue), where the polymerase enzyme might be viewed as an active surfactant.
In the future we will develop theoretical basis of such phase-separating system and check the predictions of the model by perturbing the transcription levels in developing embryos.

In a recent collaborative effort (with Simon Alberti, MPI-CBG, and Jochen Guck, MPL Erlangen) we have discovered that single-cell organisms such as yeast or amoeba can survive energy depletion by transforming their cytoplasm from a fluid-like state to a solid-like state. We used several techniques such as passive microrheology, AFM measurements, and real-time deformability cytometry to demonstrate that cells transition to a state with pronounced elastic properties. Figure shows the trajectories of tracer particles in budding yeast cells in two different states: high exploration of cytoplasm in the fluid-like state (left) and almost no motion in the solid-like state (right). It was shown that the major cause of this transition is the drop in intracellular pH which leads to a widespread self-assembly of cytosolic proteins.

We have planned an extensive program to further develop this line of research. We aim to understand the nature of the solid-like state in the energy depleted cells. In collaboration with the group of Teymuras Kurzchalia, MPI-CBG,  we will focus on the related transition of the cells and organisms (C.elegans worm) during desiccation. It was previously shown in plant seeds, that the increased accumulation of certain sugars (sucrose in plants and trehalose in C.elegans) leads to the glass transition in seeds at the removal of water. What is the physical mechanism of sugars conservative role remains poorly understood and we would like to contribute to answering this challenging question.

Recently we investigated the problem of chromosome alignment for recombination during meiosis (with Frank Jülicher, MPI-PKS and Iva Tolić, RBI). This distinct biological problem appeared to be linked to a gold-mine of statistical physics problems. We first could reduce the original problem to finding the conformation of pinned polymer loops under constant external force (see figure). This in turn can be formulated in the language of random walks and Brownian bridges. Surprisingly the found analytical solution relied on the Fermi-Dirac statistics. In order to study the relaxation dynamics of such polymer loops, we used the mapping to the particle system of asymmetric exclusion process (ASEP), which in turn can be solved by using the Bethe Ansatz methodology. Further analogy can be drawn to the single-file diffusion in the finite domain with reflecting boundaries. This work is in progress and it shows that very seemingly distant approaches of statistical physics can be used to analytically attack problems motivated by concrete biological questions.

Random walk models are excellent analytical tools for addressing a number of important questions of statistical physics: various transport processes including normal and anomalous diffusion, aging, memory effects, finite or random velocity of random walkers, and transport in active media. One of the most advanced models is the Lévy walk model, which we have recently reviewed  (with Sergey Denisov, Augsburg University,  and Josef Klafter, TAU). We continue to explore this model by extending its theory to higher dimensions and exploring its further applications.